Flags - Glossary of Flag Terms and Parts of a Flag

The Main Parts of a Flag are illustrated and named in the drawing below: 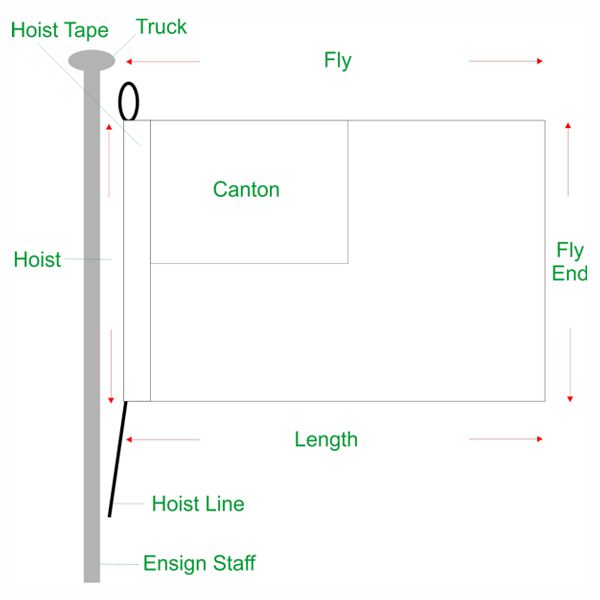 The different shapes that feature in Flag Designs are illustrated and named in the drawing below:

Appliqué – one piece of flag fabric sewn on top of another – the sewing technique used to attach a decorative motif to a flag.

Badge, Motif, Emblem, Charge, Coat of Arms – different terms to describe all the different designs and symbols that appear in the field of the flag.

Burgee - a flag expressing an identity e.g. membership of a club. Generally, a triangular pennant shape or flag with a swallow tail fly end. Local courtesy flags have become popular to display the locality of the skipper and crew’s home port e.g. Devon, Dorset, Cornwall. N.B. These should be flown from the port spreader with the appropriate courtesy flag(s) flown from the starboard spreader.

Canton - any quarter of a flag, but generally referring to the top left quarter (next to the hoist) e.g. the Union Flag in the Red Ensign

Colour Fast – an important property of flag fabric, which prevents colour migration (bleeding) from one colour into another and enhances resistance to fading caused by UV rays (sunshine)

Courtesy Flag Origins – some countries have only one flag design for all land and marine usage, which makes the choice very simple. Generally, the Civil Ensign is the preferred flag for visiting yachts but beware, there are exceptions.

Field – the back-drop fabric for the whole flag. The field may be covered by other details on the flag e.g. a Cross, Border or Horizontal/Vertical stripes.

Fimbriation - a narrow border which separates two other colours, commonly white or yellow e.g. the South African flag has white fimbriations (lines) separating the different colours of the Pall.

Fly – the longer, top edge of the flag, including the length of the top edge, traditionally the half of the flag furthest from the leading edge, also sometimes used to describe the leeward end of the flag.

Fly End – the vertical edge at the leeward end of the flag, away from the halyard, mast or flagstaff.

Hemming - forming a narrow folded edge in a fabric and sewing it to prevent fraying or unravelling of the weft or weave. Hemming can be single stitched but also double (twin) or even triple stitched for extra durability.

Hoist – the Heading or leading edge of the flag, attached to the halyard, mast or flagstaff, may also refer to the vertical height of the flag. The action, to hoist a flag, refers to raising it aloft by means of a halyard (rope)

Hoist Tape – strengthens the leading edge, optimally with a special herring bone weave polyester webbing, which can be folded neatly and sewn to form the reinforced windward end of the flag.

Jack – an ensign (national flag) flown from a short mast at the bow, generally only used where the traditional position at the stern is impracticable.

Obverse/Reverse – the front view of the flag when the hoist is correctly positioned next to the mast or halyard. The other (back) side is known as the reverse.

Seaming - joining two separate pieces of fabric together to make one. Overlaid seaming is commonly used on flags. The seam allowance is folded over on each edge and interlocked before sewing.

Yard Sizing - traditionally the diagonal measurement from one corner to the other corner of the whole flag. Yard sizing has now become a more nominal reference, Flag manufacturers generally make up flags, which conform to a proportional horizontal and vertical rectangular shape e.g. Half Yard = 45cm Fly (length) x 30cm Hoist (vertical height)