As a gesture of courtesy, yachts should fly a foreign nation's flag when they enter and operate in its waters.

There are no universal rules governing courtesy flag etiquette.

Officials interpret the rules differently from country to country, region to region, island to island or even port to port.

Failing to fly a courtesy flag or flying a courtesy flag improperly may only be considered impolite in some places but in others where it is enforced by local law, officials go as far as impounding passports or imposing fines until the proper flag (which may only be available to purchase locally at great expense) is flying on board.

If you are in any doubt, the best thing to do is observe other yachts from your country and even ask them for guidance.

N.B. Simultaneously flying all the courtesy flags of the different countries/islands that you intend to visit on your cruise should definitely be avoided because your intentions could easily be misinterpreted and cause offence.

Traditionally and logically, you should not fly a courtesy flag until your vessel is properly cleared by customs and immigration.
Until clearance is complete, you should only fly the yellow Q (quarantine) flag.
This is because you have not officially entered the new country until you are cleared through customs.
However, it is common practice, and generally speaking, courteously accepted in many countries, to hoist the courtesy flag above the Q flag in anticipation of clearing customs and immigration.

On a mast with spreaders, the courtesy flag (or Q) should be flown at the starboard spreader.

If the yacht has more than one mast, the courtesy flag should be flown from the starboard spreader of the forward mast.

On a yacht without any mast, the courtesy flag (or Q) should be flown at the bow.

N.B. Only ever your own ensign or national flag should be flown from the stern of a yacht. 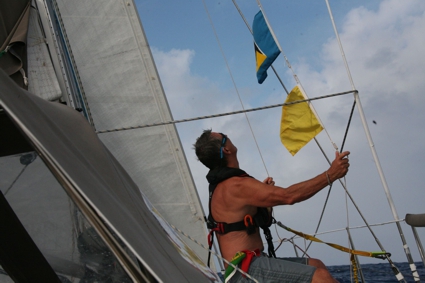 The True Spirit of Courtesy Flags

In recent years yacht owners have been a little more adventurous in their approach to courtesy flag etiquette, especially in relation to individual countries, Crown Dependencies and other islands within the United Kingdom, including regional and even county flags.

It may actually be considered polite or even proper to fly the appropriate regional or island courtesy flag e.g. in the Channel Isles there are individual courtesy flags for each island.

There is nothing wrong with endearing yourself to the local sailors, fishermen and officials.
It is entering into the spirit of the 'courtesy' tradition.
Some locals may be particular, whether it is the correct maritime ensign or the land flag, but in general it is the effort that you make to be courteous which is important and therefore appreciated.

This courteous local approach is welcomed when extended bluewater cruising e.g. in the Caribbean, the Pacific and the Atlantic where French, British, Dutch, Portugese and Spanish islands have their own local flag.

If you are flying the local flag as a matter of courtesy, then you will be entering into the true spirit of courtesy flag etiquette and doing the 'right thing'.

If you are on a strict flag-budget and are not interested in MAKING YOUR OWN FLAGS, then the parent island flag will generally pass muster:

If the region or island flag is in ‘foreign waters', then it should be flown below the National Courtesy flag e.g. Brittany under France.

There may be some local exceptions to this rule e.g. Azores flag over Portugal flag, Galapagos over Ecuador.
We advise you to seek advice or have a good look around the marina or anchorage, at how other visiting yachts are displaying their flags.

If you and your crew want to fly your regional or county flag or even your cruising club flag e.g. Cornwall, Devon, the ARC World Cruising Club,  then it is probably best to hoist these on the port spreader to avoid any confusion with your courtesy flag(s).

This is becoming much more prevalent, especially on rallies.

Flags should always be displayed from the correct spreader, tastefully and in good spirit, to ensure that no offence is caused. 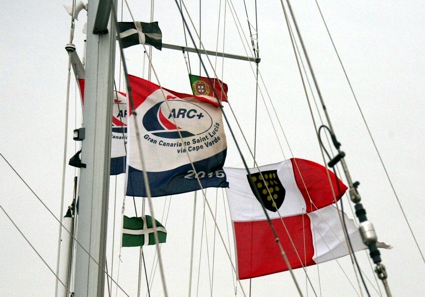 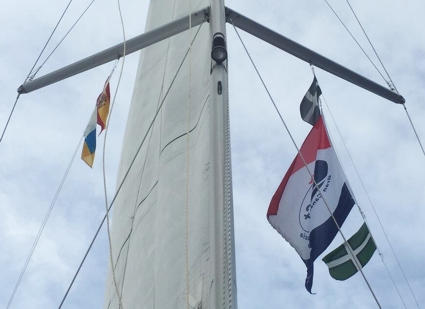 A UK registered vessel should fly the national maritime flag - the Red Ensign, unless entitled to fly a special or privileged Ensign.

The most senior position for a flag on a vessel is reserved for the Ensign. The Ensign (or National Flag) should be flown from as close to the stern of the vessel as possible, denoting the nationality of the vessel.

The burgee should take the next most senior position on a yacht, which is at the main masthead.
Only one burgee should be flown on a yacht.
Burgees are now commonly flown at the starboard spreaders. However, no other flag should be flown above the burgee on the same halyard.
You should not fly a burgee above a national courtesy flag on the same halyard.
Therefore if you choose to fly your burgee at the starboard spreader, you will have a dilemma in ‘foreign waters'.
This could be obviated by reeving a second flag halyard to the starboard spreader, but is not strictly following flag etiquette.

The Union flag, the Welsh Dragon and the Crosses of St Andrew, St George and St Patrick are primarily land flags and should not be flown at sea by cruising yachtsmen.
At sea the cross of St George is the flag of an Admiral and should therefore not be flown by anyone else, without special dispensation.
The St Andrew flag could be mistaken for the code flag M signalling "my vessel is stopped and making no way through the water".
The St Patrick flag could be mistaken for the code flag V signalling  "I require assistance".

Some Signal Code Flag Sets have flags made with a loop at the top and a distance line with a toggle at the bottom. While this requires no knots, the disadvantage is that the overall length is predetermined and may not suit the dimensions of your yacht and rig. 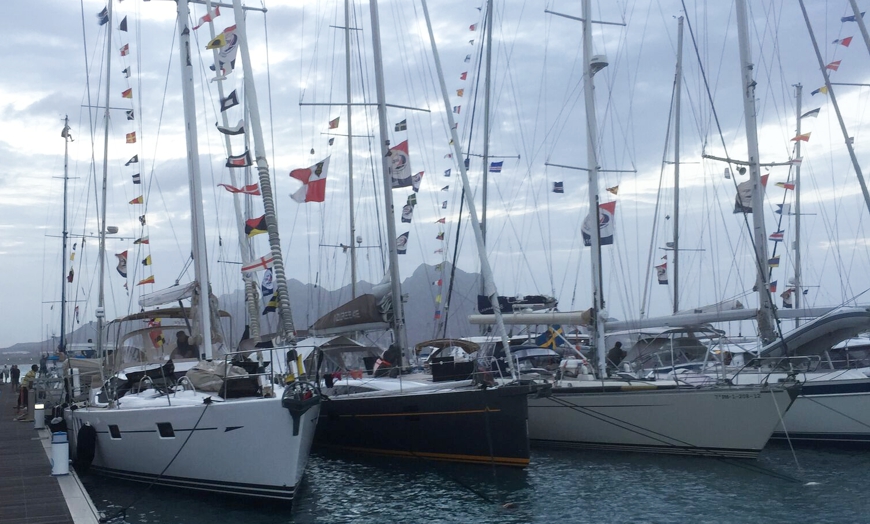 Jimmy Green Sailing Flags are all screen printed in our modern supplier partner factory in Italy on top quality UV resistant (for reduced fading) 100% polyester woven bunting - Except for the Jimmy Green Premium Sewn Ensigns, which are manufactured in the UK from the very best MoD quality woven 100% polyester bunting

All our flags are delivered loose, checked and inspected, labelled and packaged in house by Team Jimmy Green.