Get an instant online quote

This video demonstrates the Jimmy Green online custom build tool by compiling a Halyard and Genoa in LIROS Braid on Braid EVO.

Bring or send your old wires for use as a pattern - saves you the time and responsibility for the measurements.

The Jimmy Green Rigging Sales Team are happy to help: Contact Us

Jimmy Green Marine have been splicing rope and wire since 1981

Back in the late 1970s and early 1980s, there was very little choice in the local chandlery for yachtsmen who wanted to finish their rigging in style.
Specialist ropes for different rigging applications were not readily available and the concept of colour coding was in its infancy. By the same token, the inefficient means of terminating ropes by tying a knot was more prevalent than splicing.

In those days, most sailors could turn their hand to a 3 strand splice or a whipping but new braided rope constructions meant a whole raft of new technical skills were required.

Mike and Alistair Green founded Jimmy Green Marine in 1981 with the intention of developing the rope and splicing options available to sailboat owners:

Mike Green headed up the first Jimmy Green Rigging Team, collaborating with Marlow and LIROS to perfect the techniques necessary for splicing the new ropes brought to market in the 1980s and 1990s.

Mike instigated the introduction of methodology into the process, making a written record of how each splice should be achieved and finished. His insistence that every splice was carried out to the same high standard has endured to this day.

In the 1990s the Head Rigger mantle was passed on to Peter, Alistair’s brother in law. Peter continued to oversee all things splicing until 2007 when Mike retired and the overall responsibility was reassigned to James Green, Alistair’s son and a director of the company. Experience and continuity are important factors in maintaining standards and Peter is still a valuable member of the splicing and rigging team.

Rope manufacturer innovation has been prolific over the last decade. LIROS and Marlow now produce running rigging ropes that were initially considered only for extreme performance applications, but are now affordable for performance cruising.

James maintains personal contact with all the head technicians at LIROS and Marlow, visiting each factory on a regular basis to check on the latest design developments.

The Jimmy Green Rigging Team are then fully trained in all the latest splicing and finishing techniques to complement these new high-technology ropes. 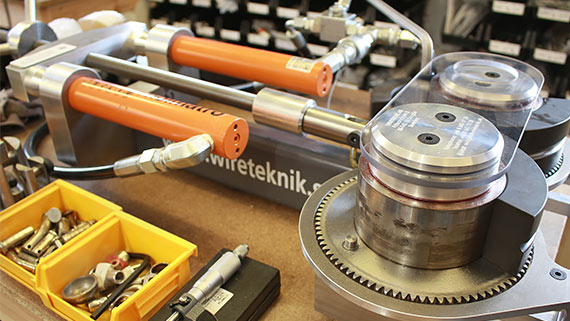 Made to Measure Jackstays      Webbing Guardrails

Our Worldwide Express Delivery service can get you sailing again with minimum delay.

We have shipped to over 60 different countries in the last 12 months – all kinds of yachting gear including chain, anchors, rigging and custom mooring ropes.

All our prices include VAT within the UK with the exception of the Channel Islands.

UK Vat is not payable on export orders.