Telephone lines open Weekdays 9.00am to 5pm, Saturday 9am to 2pm

Spade claim that they manufacture the world's most reliable anchor

Spade holds - by presenting it's full surface area towards the direction of load - the larger the surface area, the greater the holding power.  Any load sufficient enough to move the anchor will cause it to bury further,  Whereas a convex* blade can pull out with a sudden wind or tide shift, the SPADE's concave blade will remain buried.  A concave blade acts a bit like a parachute under the seabed and continues to remain buried and offer maximum resistance  even when the load is so great that it begins to move.  The SPADE will not pull out during wind or tide shifts, instead it chisels its way around to the new direction.

Spade keeps on holding - built to withstand enormous loads as they keep holding long after other anchors have dragged. On S80 and above, the shanks are fabricated to form a triangular box section to maximise strength without compromising weight distribution.

Spade Technical Information ON how the Safety Criteria are achieved 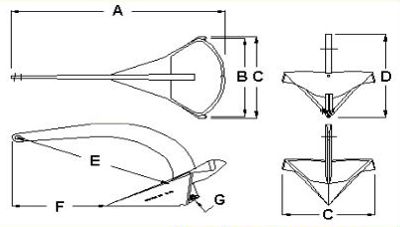